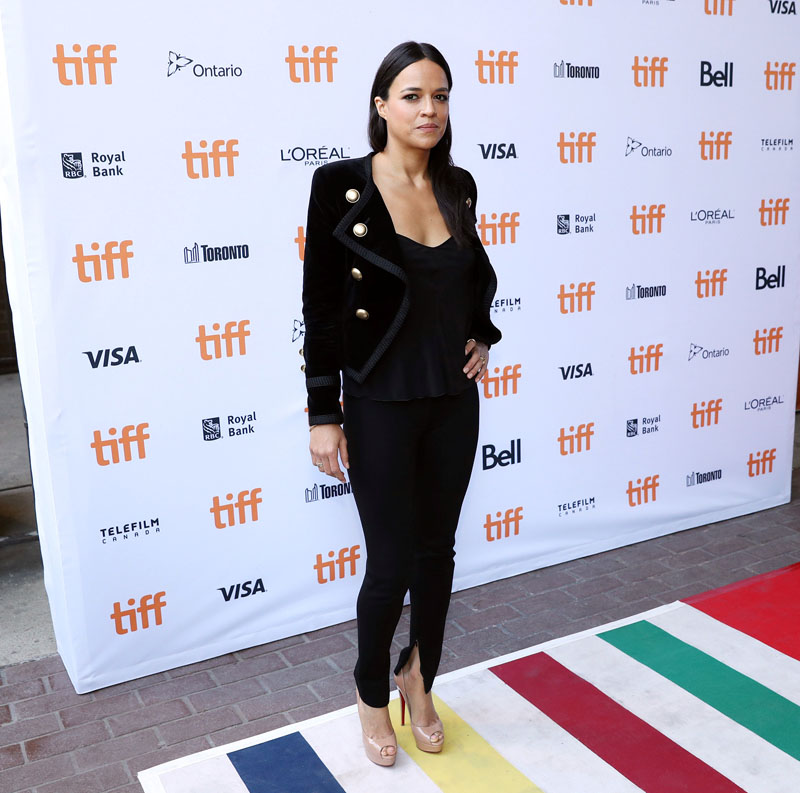 Actress Michelle Rodriguez arrives for the premiere of the film (re) Assignment at TIFF the Toronto International Film Festival in Toronto, on Wednesday, September 14, 2016. Photo: REUTERS

TORONTO: The director and star of a controversial film about a hitman who is put through gender reassignment surgery by a relative of one of his victims defended the project as it had its world premiere at the Toronto International Film Festival on Wednesday.
“(re)Assignment” stars Michelle Rodriguez as an assassin named Frank Kitchen. After killing the brother of a brilliant but deranged surgeon, Kitchen is captured and awakes to find himself unwillingly turned into a woman.
The premise drew criticism from some in the transgender community, who said the medical procedure should not be used as a sensationalistic plot device. It was also called transphobic and exploitative by Twitter users.
The film’s challenges have not stopped there. Some early reviews have been very negative, with the Guardian newspaper calling it “a strong contender for 2016’s worst movie”.
Director Walter Hill, who made action classics “48 Hours” and “The Warriors”, noted at the premiere that other filmmakers had dealt with “altering biological organs”.
“I don’t know why this one stirred up such interest in a way that those didn’t except that I think the transgender situation has been more in the headlines the last couple of years,” he said in a red carpet interview.
“I don’t know. I’m a storyteller, it’s a crime story, it’s a noir vision, it’s comic book in a way and quite a few women have said to me that after seeing the movie, they feel empowered by it.”
Rodriguez, who starred in the “Fast and the Furious” series, took issue with criticism, asking: “Are they mad that somebody decided to take their branded transgender operation and use it on heterosexual people?”
She also noted the film was a “B-movie noir genre comic book take on something” and that she herself was part of the lesbian, gay, bisexual, and transgender (LGBT) community.
“I’m bisexual. I do guys. I do girls. You can’t really argue with me because I’m you. So if I do a movie, I’d never do a movie with the intention of offending anybody in the LGBT community because I’m a part of it,” she said.
Sigourney Weaver, who plays the deranged doctor, said “certainly no-one is demeaned or denigrated”, adding: “It’s not a Disney movie. It is noir.”