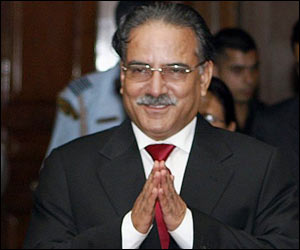 KATHMANDU, Feb 23: UCPN (Maoist) Chairman Pushpa Kamal Dahal has shared that the efforts to unite all the parties following the ideology of Maoism (Maoist parties) was underway.
In a book launching programme, leader Dahal said that he was not only hopeful but confident that the unity among such parties would be forged. The book 'Hamro Sanskriti and Sanskar' (Our culture and values), penned by writer Ranendra Barali was launched on the occasion.
Dahal, also former Prime Minister, spoke of the need for the revolutionary and nationalist political parties stay untied to safeguard the national sovereignty, which, he argued, was at stake lately.
Similarly, CPN Maoist Revolutionary leader Dev Gurung expressed his confidence that the newly released book would help dispel the superstition prevailing in our societies and transform the Nepali society by contributing to the mental sophistication of the people.
Likewise, UCPN (Maoist) leader Bishwa Bhakta Dulal 'Ahuti' and journalist Hari Govinda Luintel stated that the book elaborates on various 16 sanskaras for human, from birth to death. "The book was written from perspective of human experiences rather than ideological," they opined in unison.
Shedding light on the purpose of the newly unveiled book, writer Barali said that he penned the book so as to illustrate on the evolution of human and world from the scientific viewpoint. RSS