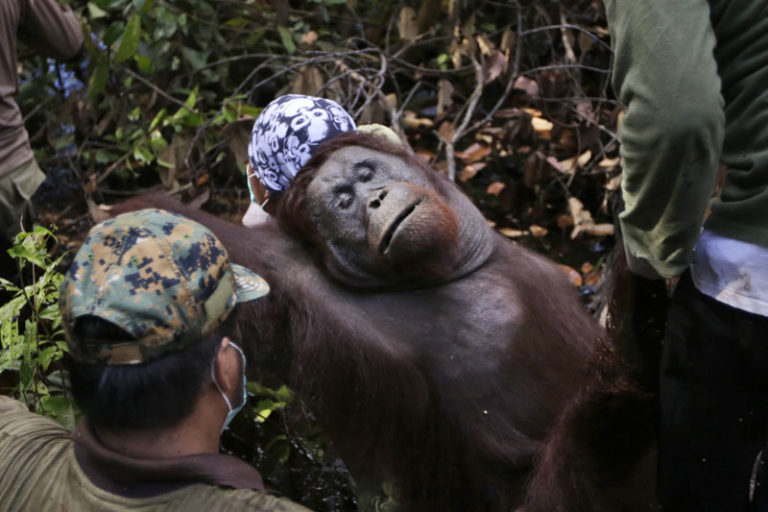 FILE â€“ Conservationists from Borneo Orangutan Survival Foundation carry a tranquilised orangutan as they conduct a rescue and release operation for orangutans trapped in a swath of jungle in Sungai Mangkutub, Central Kalimantan, Indonesia, on January 5, 2016. Photo: AP

JAKARTA: A global conservation group says Borneo’s orangutans are now a critically endangered species due to hunting and destruction of forest habitat.
FILE – Conservationists from Borneo Orangutan Survival Foundation carry a tranquilised orangutan as they conduct a rescue and release operation for orangutans trapped in a swath of jungle in Sungai Mangkutub, Central Kalimantan, Indonesia, on January 5, 2016. Photo: AP
The International Union for Conservation of Nature estimates the number of Bornean orangutans has dropped by nearly two-thirds since the early 1970s and will further decline to 47,000 animals by 2025.
The group said the projected population figure would represent a population loss of 86 percent.
The assessment for the IUCN Red List of Threatened Species was carried out earlier this year and published this week. Previously the species was considered to be endangered.
It said deforestation has dramatically shrunk the primate’s habitat, with about 40 percent of Borneo’s forests lost since the early 1970s and another huge swathe of forest expected to be converted to plantation agriculture in the next decade.
On top of that, hunting is also a significant pressure because orangutans are slow breeders, producing only one offspring every six to eight years on average.
IUCN estimates between 2,000 and 3,000 of Borneo’s orangutans have been killed every year for the past four decades, mainly for their meat.
“If hunting does not stop, all populations that are hunted will decline, irrespective of what happens to their habitat,” IUCN said. “These findings confirm that habitat protection alone will not ensure the survival of orangutans.”
Orangutans only live in the wild on the Indonesian island of Sumatra and on Borneo in the Malaysian states of Sarawak and Sabah and Kalimantan, which is the Indonesian part of Borneo.
The Sumatran orangutan has been critically endangered since 2008.
Both species are protected in Malaysia and Indonesia but much of their habitat is not.